Plaque recalls 'Father of the UN genocide convention' Dr. Raphael Lemkin
For immediate release (New York City, Ottawa) – Sept. 20, 2018
(sent on behalf of the UCCLF)
On Thursday, Sept. 20, 2018, a permanent plaque recalling the pivotal research the world’s first and foremost legal scholar on genocide did with regards to the Great Famine of 1932-33 in Soviet Ukraine, was unveiled in New York City.
Spearheaded by the Ukrainian Canadian Civil Liberties Foundation (www.ucclf.ca) in collaboration with the Ukrainian Institute of America, the initiative was made possible by the generosity of Ukrainian and Jewish donors in both Canada and the United States, and was unveiled 65 years to the day on which Dr. Raphael Lemkin labeled the Famine of 1932-33, now known as the Holodomor, as a “classic example of Soviet genocide.”
“He was the first to call it what it was,” said UCCLF’s Dr. Lubomyr Luciuk, who was on hand to help unveil the commemorative marker.

On Sept. 20, 1953, the “Father of the UN genocide convention” described Ukraine’s genocide succinctly: first, Moscow’s troops wiped out Ukraine’s intelligentsia and clergy via murder and deportation. Many millions in the peasantry then starved to death in the Kremlin-engineered famine. Non-Ukrainians were subsequently resettled into Ukraine from across Russian and the USSR to fill the void left by the millions starved from existence.
“Remembering a man who spoke truth to power is our privilege, especially at a time when a KGB man in the Kremlin and his minions today deny the Holodomor,” said Luciuk.
About 100 people were in attendance, including scholars, members of the diplomatic corps and the American Ukrainian community of New York and the Eastern Seaboard. It is the world’s first simultaneously English-, Ukrainian-, Yiddish- and Hebrew-language plaque. It stands at the Ukrainian Institute, near Central Park, not far from the NYC headquarters of the United Nations.
“I was a newborn when Dr. Lemkin spoke,” said Luciuk, “Now I am older than he was when he died. Yet I know that what happened 85 years ago will not be forgotten, never again, and for that we have thanked a righteous man by the name of Raphael Lemkin.” 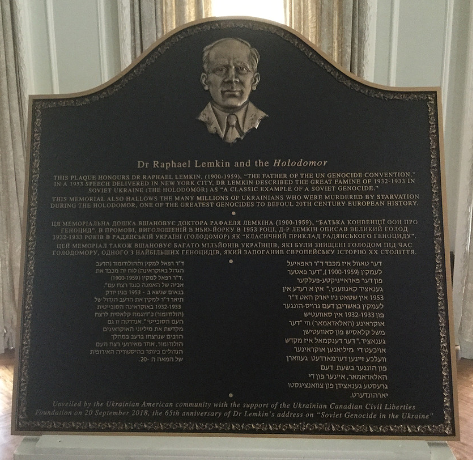