I will guess what you are thinking

Please follow the instructions below carefully. Go through each step first before pressing the below button, or you'll only ruin everything! When you are finished, touch analyze...
Posted by ezreklama at 10/27/2017 03:56:00 PM


The Manitoba government has signed an agreement with the Atlantic provinces to develop a shared apprenticeship management system that will improve and modernize online services, Education and Training Minister Ian Wishart announced today.
“Strengthening the services we provide for Manitobans is a priority for our government and we are pleased to take an important step forward to modernize the apprenticeship program,” said Wishart.  “This new system will improve services for apprentices, employers, journeypersons and training providers with modern, web-based technology.  It will eliminate red tape by replacing the current cumbersome and time-consuming need to register for classes in-person with easy-to-use online registration.”
The minister noted the current system has limited online client-service functions and is reaching the end of its useful life.  The new apprenticeship management system will better meet the needs of apprentices, training providers and employers and will allow Apprenticeship Manitoba to ensure effective communication and enhanced reporting.
“Manitoba’s apprenticeship system is built on strong partnerships between employers, educators and learners,” said Wishart.  “We are taking action to ensure this important part of our education system remains responsive to industry needs and supports the continued growth and development of Manitoba’s economy.”
Wishart confirmed the new system will allow apprentices, training providers and employers to complete forms, process payments and log hours online with self-service functions.  Developing a shared system with the Atlantic provinces will also reduce implementation and maintenance costs, and will enable improved forecasting of training offerings, especially to meet regional demands, he added.
The shared system is partially funded by the government of Canada.  In addition to funding from the federal government and the governments of Newfoundland and Labrador, Nova Scotia, New Brunswick, and Prince Edward Island, the Manitoba government’s investment of $3.7 million over five years enables the acquisition of a state-of-the-art new system for only 14 per cent of the total cost.
“This partnership is a prime example of a strategic investment that not only will improve services for Manitobans but also provide value for taxpayer money,” said Wishart.
The new, shared technology system is expected to be in place in 2019, he added.
- 30 -
Posted by ezreklama at 10/13/2017 12:08:00 PM

blog posted by Ihor Cap
Internet daily, “Ukrayinska Pravda” reports a sensational find – A Map issued by Austria in 1918, which first defines Ukraine’s borders, without a doubt depicts Crimea as part of its geographical borders.
Michael Havryliv, a private citizen of Lviv, obtained the map visiting an Ivano-Frankivsk marketplace in the mid 80’s and decided to donate it to the historical museum in Ukraine. As the internet daily says, “Maps of Ukraine in 1918 were purposely destroyed in Soviet times and its storage could get up to 10 years imprisonment.”

"Map of Ukraine 1918” is written on it. It clearly identifies the then Ukrainian state owned territories of Transnistria, a part of Belarus-Beresteyschina, Gomelschina (that stretches deep into the territory of Ukraine to Belarus 80-150 kilometers) and east Sloboda (modern Kursk and Voronezh region – where the wedge stretched for 250 kilometers).
The boundaries have since changed, but one could clearly see that Crimea then belonged to Ukraine. Mr. Havryliv said that he was satisfied that the original was in a museum, for it has to be accessible to all. Published by the Viennese publishing house Freyth and Berndt, the map comprises an awareness of the territory, which includes the independent Ukraine state, and an understanding of what was being protected during the first world war. As such, there is no question of the map’s authenticity. The Ukrainians have no territorial claims, and the map will be of interest to Ukrainian citizens and historians alike.
Source: http://life.pravda.com.ua/ 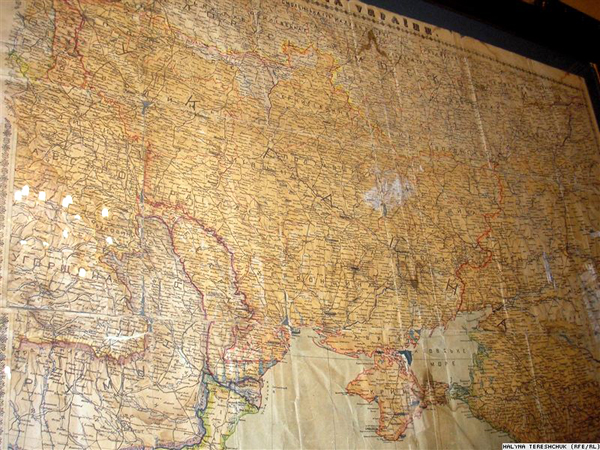